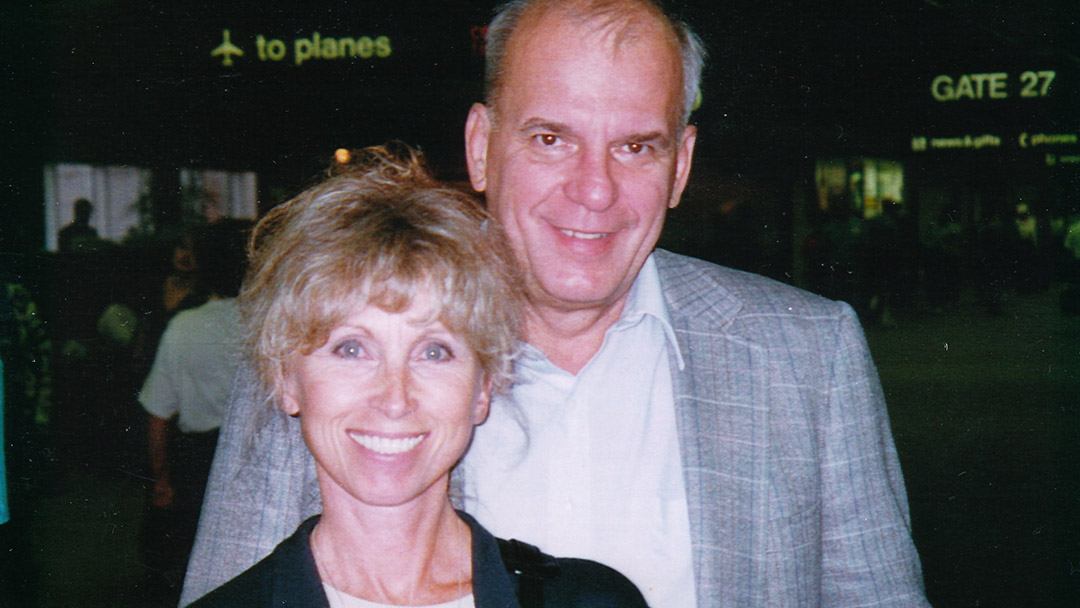 When Bill Hoffman arrived at Mayo Clinic's Inpatient Rehabilitation Unit, he was so weak he could barely move. Not only was his strength gone, his happiness had disappeared, too. That began to change when Bill picked up a paintbrush and immersed himself in the creative process.

Bill Hoffman, a retired neurosurgeon, never considered himself very artistic, and he didn't think much of painting. But last fall, while Bill was recovering from a serious medical complication following surgery that left him a shell of his former self, it was painting and recreation therapy that opened the door for him to return to normal.

Artmaking at Mayo Clinic's Arizona campus gave Bill and Mariann, his wife of 54 years, time to escape the physical, mental and emotional stress that accompanied Bill's prolonged hospital stay. The art sessions are a collaboration between the Recreational Therapy Program in Mayo's Department of Physical Medicine and Rehabilitation, and the Center for Humanities in Medicine, which works with professional artists to facilitate programming. Phoenix-area artist Richard Retter has been with the program since it began in 2014.

"Recreational therapy explores those things that just allow us to be human," says Carol Graziano, a Mayo Clinic recreation therapist who worked with Bill. "It creates a full experience of having a safe space where patients can relax."

The time they spent in the art room was an escape for Bill and Mariann. "It removed me mentally," Bill says. "All of a sudden, I had a little break in time every day doing something I kind of enjoyed. I was able to feel like I could just do this, and it was fun and relaxing."

For a time, fun and enjoyment seemed impossible for Bill and Mariann. After surgery for bladder cancer in October 2018, Bill experienced a myasthenic crisis that triggered extreme muscle weakness and fatigue. As a result, Bill lost his ability to walk, eat and talk.

Fighting the effects of his condition was a daunting task. But with consistent support and encouragement from Mariann and the couple's four adult children, in addition to the comprehensive care provided by his Mayo Clinic medical team, Bill pulled through.

"I have nothing but the highest regard for the Mayo intensive care unit," Mariann says. "Anywhere else, and he would not be alive. I know that. Our daughter, a physician, knows that, and our whole community of physician friends knows it."

Bill spent three weeks in the ICU — two of which he cannot remember — before he was transferred to the hospital's Inpatient Rehabilitation Unit. When he arrived, Bill was so weak he could barely turn over in bed. In addition to the serious physical effects he experienced, Bill's medical situation took a heavy toll on his emotional health. "I was really bummed about everything," he says.

When Bill arrived in the unit, he was as low as he'd ever been, says Mariann. "So depressed, stressed, as far down as you get."

Bill's physical and occupational therapists told him they were going to work him hard, and they did. "They were really great, but it was difficult," Mariann says. "And then they said, 'We would like for you to come to the art program.' I thought: 'No way is he going to do that. He doesn't leave the room, doesn't put the television on, speaks in monosyllables to those he allows to visit.'"

One day, however, Mariann decided she wanted to paint. She told her husband she was going to an art session. "I remember thinking as I was sitting there: 'I am going to do this. I am going to learn.' And he decided to go because I wanted to go, and everything changed for him."

Enjoyment with a purpose

In the art room, Bill and Mariann found warm, friendly staff members supporting participants through the creative process. "There's something to say about the people who were running the class, who were so positive and so pleasant," Bill says. "You almost had to enjoy yourself doing it."

For Bill, who initially lacked interest in socializing with other patients, the art sessions connected him to the community without forcing him to leave his comfort zone, Mariann says.

"Going to art classes, he didn't have to talk to anyone. However, his ears were listening, and he was aware of people around," Mariann says. "People were commenting. They would look at his. He would look at theirs. I think it brought him out of his shell. There wasn't much smiling before that."

One aspect of Bill's care that could bring out a smile at that time was daily visits from his physician, Mitchell Humphreys, M.D., in the Department of Urology. "He was the doctor and friend and counselor that brought a smile to Bill's face with every visit," Mariann says. "He helped to keep us sane during the difficult times and went above and beyond his duties."

"It gave me a period of time to do something with my hands and brain, which I enjoyed doing. It was something normal."

The artist-in-residence hoped to help Bill make more personal connections like that. Noticing Bill's hesitation to socialize with his peers, Retter approached Mariann after class one day and asked how he might be able to connect with Bill.

"The art instructor said to me, 'Is there anything we can get him to talk about?'" Mariann recalls. "I said, 'Well, he played football for 12 years.' And he said, 'Perfect!' The next time he came in, the instructor says nonchalantly, 'Hey Bill, I heard you played football.'"

This type of oversight and engagement is a purposeful part of the program. While patients participate in recreational therapy, the therapists watch and advise.

"We're still looking at their function but in a more creative way," Graziano says. "They are so focused on the medical issues and the rehab program. They don't realize that we can think about wellness and ways of getting better while having fun."

For Bill, the focus wasn't to become a better artist. It was about feeling responsible for creating something. "I'm not very artistic, but I enjoyed picking different colors and blending them, and I enjoyed making an object," he says. "It gave me a period of time to do something with my hands and brain, which I enjoyed doing. It was something normal."

As Bill's recreation therapist, Graziano says that it was exciting to watch Bill and Mariann embrace the art program. "They brought in family members. They were able to do it as a family therapy project, and they all had pieces to take with them," she says.

Bill was discharged from the Inpatient Rehabilitation Unit in late November 2018, and he continues to receive outpatient physical therapy twice a week. Although Bill cannot remember all of the time he was in the hospital, the hours spent making art are ones he and Mariann have come to treasure. Both Bill and Mariann brought home the canvases they painted during the art sessions.

"The very first one that Bill and I painted separately we didn't like. The instructor drew a squiggle on the canvas, and he said, 'Turn this into something.' Bill's turned into a duck, and mine turned into an alien," Mariann says. "Well, I hung them up in the hallway. And Bill said, 'That is so weird.' But it was a great memory, and it shows us how far we've come."