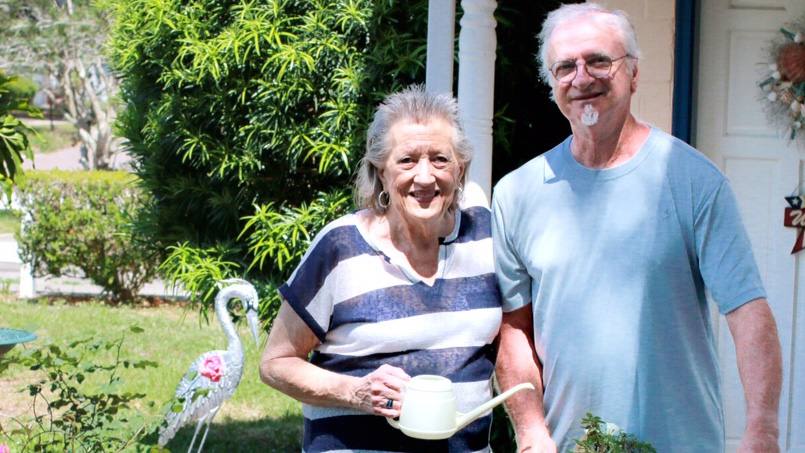 Plagued by symptoms of cirrhosis and unclear communication, Carolyn Ostrout found her health was failing. But a visit to Mayo Clinic that included working with an American Sign Language interpreter led the way to a liver transplant and dramatic improvement in her health.

February 2017 was a big month for Carolyn and Bruce Ostrout. The couple celebrated their 48th wedding anniversary, along with the one-year anniversary of Carolyn's liver transplant. The latter milestone was especially significant as Carolyn recalls feeling frustrated and hopeless until she came to Mayo Clinic's Florida campus in October 2015.

"I was in a lot of pain and had been for years, and no one did anything," says Carolyn, a Miami native who is deaf. "I didn't think anyone could help me."

The answer to Carolyn's health problems started with better communication — thanks to a sign language interpreter — and culminated with a transplant that restored her health and gave her new hope.

Three years earlier, Carolyn had been diagnosed with cirrhosis at another medical facility. At that time, no American Sign Language interpreter was available to explain the severity of her condition and make sure she and her husband, who is also deaf, understood the medical terminology.

"I didn't understand a lot of what was going on," Carolyn says. "We had to write back and forth to communicate with the doctors and the nurses."

As a result, Carolyn's health worsened. She had diarrhea, severe abdominal bloating and leg swelling. She had considerable difficulty using her hands and eventually lost the ability to walk.

"At first I didn't want to come to any medical facility because I was so frustrated. It's like I had given up." — Carolyn Ostrout

"My sister started noticing that when I signed she didn't understand me. My writing also got horrible," Carolyn says. "When I wrote something and showed it to the person, they were unable to read it."

"At first I didn't want to come to any medical facility because I was so frustrated," Carolyn says. "It's like I had given up."

Despite her misgivings, Carolyn decided to give Mayo Clinic a try.

"As soon as we came to Mayo, there were many specialists that came to evaluate me," she says. "I felt so much better, though, because they had a real interpreter to explain everything that was happening."

Staff interpreter Nanci Gluff was assigned to help the Ostrouts. Bruce says having her there was invaluable to ensure nothing was missed or misinterpreted.

"When Carolyn was very ill, I had to make all the decisions," Bruce says.

"But the interpreter was there with me to help me communicate with the doctors."

"Nanci makes me feel relaxed and calm. She helps Bruce and I understand what the doctors are saying about my medical care and treatment." — Carolyn Ostrout

Carolyn was diagnosed with chronic liver failure. She required treatment for fluid retention in the abdomen (a condition called ascites) and hepatic encephalopathy — mental fogginess that can develop when toxins the liver should normally filter enter the bloodstream. She was treated with a combination of salt restriction and diuretics to help eliminate the excess fluid and salt, and with medications to clear the toxins that were causing confusion.

Gluff and an on-call interpreter were there for each of Carolyn's appointments.

"Nanci makes me feel relaxed and calm," Carolyn says. "She helps Bruce and me understand what the doctors are saying about my medical care and treatment."

In February 2016, Carolyn was admitted to the hospital twice with acute kidney failure. During the second hospitalization she was transferred to ICU because she had dangerously high levels of potassium and worsening kidney failure that required dialysis.

She was placed on the transplant list on Feb. 17, and a few days later, the Ostrouts found out a liver had been found for Carolyn. She was in ICU with a breathing tube and a feeding tube when the news arrived.

"After more than three years of really suffering, I got my health back, and I have no pain. It's wonderful." — Carolyn Ostrout

"If it weren't for the interpreters who helped Bruce and me communicate with the doctors and medical staff, I don't think I would be here," Carolyn says. "And Dr. Raj was so patient with me. He's very sweet and gentle. He explained everything he was going to do."

Today Carolyn and Bruce are enjoying the simple things in life, including gardening together, walking and going out to dinner with friends.

"I'm born again with my new liver. I can now do many things I couldn't do before. I'm walking, cooking and doing my cross-stitching again," Carolyn says.

"I love my liver, and I'm taking care of it," she says. "After more than three years of really suffering, I got my health back, and I have no pain. It's wonderful."